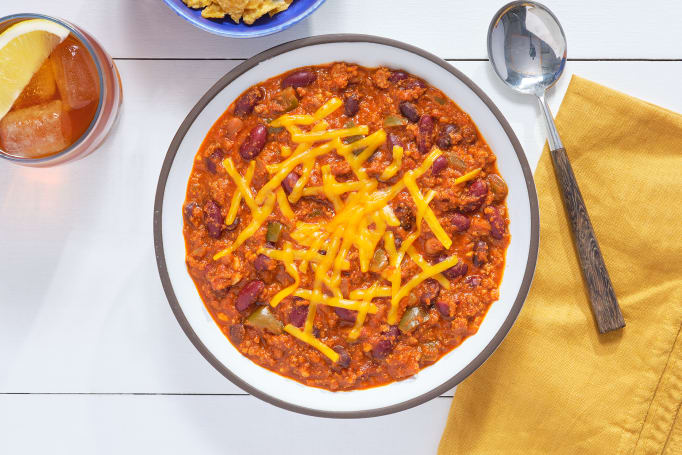 I Tried Freshly For Two Weeks: This Is My Honest Review

I am a girl that loves to eat. Recently on the blog, I shared my review of the service Dinnerly with you, and I absolutely love it as a meal kit. It’s so inexpensive, and you get a lot of food in each box.

For this post, I wanted to circle back to a box I had tried in the past but decided to stop using halfway through a week. This post is not sponsored by Freshly in any way, mainly because I have had my qualms with the box in the past and I didn’t even want to try to reach out to see if the company would send over a few boxes. After working with the company and trying the food several times, I have included affiliate links throughout this review.

In 2016, I tried Freshly, and I couldn’t get over one meal in particular. You can probably guess that I won’t be featuring that meal in today’s post. It was their Roasted Turkey with Quinoa Stuffing meal. I HATED IT. I was so excited to try it because I remember getting the box a few weeks before Thanksgiving break in graduate school. I wanted to get a head start on eating Thanksgiving foods. It was a severe disappointment for me.

Well, after hearing about Freshly a lot over the past few years, I decided to let it redeem itself.

I decided to try the meals again to see if I would like or love them. I needed a bit of a break from my normal lunch foods of ramen, burritos, sandwiches, or random concoctions I whipped together in the kitchen (I created a taco bowl once with roasted black beans, tortilla strips, chicken, and barbecue sauce that was fiyah!) I eat great for dinner, I swear, but my lunch leaves something to be desired y’all.

So, without further ado…let’s get to chatting about Freshly. 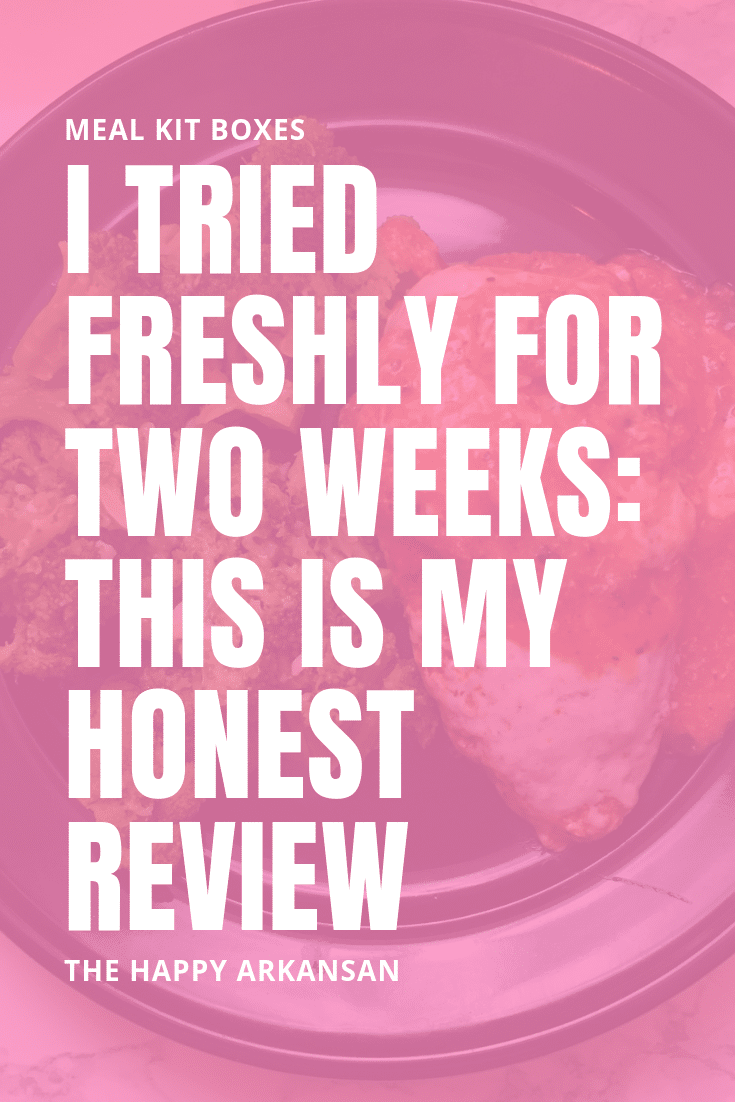 Freshly is a weekly thing, and there are a couple of meal plan options for the box:

Every option is pretty pricey, to be honest, but they all come with free shipping, which I am sure takes up a good bulk of what you pay. They sent both boxes FedEx Home Delivery after all. No joking around with shipping each box, y’all!

You can get $60 off Freshly if you use my affiliate link. With this link, you will get $20 off your first week and $20 off your second week of the six meals a week plan.

One thing I must congratulate Freshly on is the packing of their meals. They did an excellent job making sure everything got to me quickly while being cool. My meals were shipped from Texas and everything was cool when it got to me around 3 PM on both the first and second weeks of trying the service.

Each package is shipped in a box with a makeshift cooler inside. Inside the coolers are your meals separated by about three ice packs. Your food will not get hot here. Even though I picked mine up from outside right away, I am sure it wouldn’t have been so bad if they waited outside a bit. I hate Arkansas summers, though, so I wasn’t taking any chances!

What Makes Freshly Different From Other Meal Kits

Okay, there are a ton of meal kits out there, but why should you consider getting Freshly?

Freshly meals are individually packaged just for you. Plus, you can literally just pop them in the microwave for 3 minutes (on average, always check the packaging for detailed times) and they will be done. How much of a time-saver is that when you have a lot to do?

There are no loose ingredients to store or things to cook. It’s just a healthy microwave meal.

You can choose a day of the week you want each meal delivered when you pick your meal plan. I wouldn’t encourage you to pick Friday if you want them throughout the week unless you want to put a lot of meals in the freezer. The dates you need to consume them by make it almost impossible to keep them in the fridge and eat them throughout the week. You can always freeze them–this adds to cooking time though! 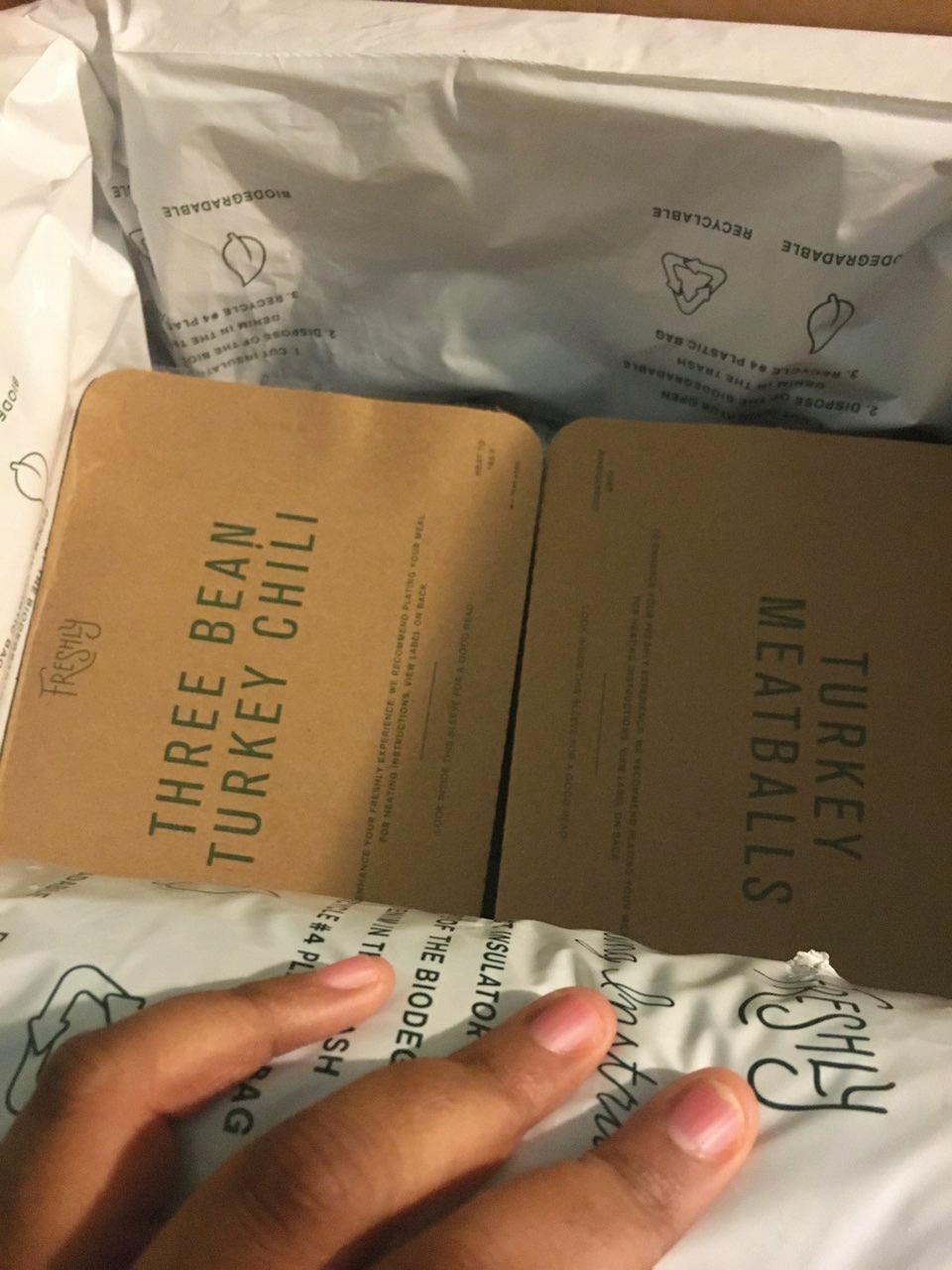 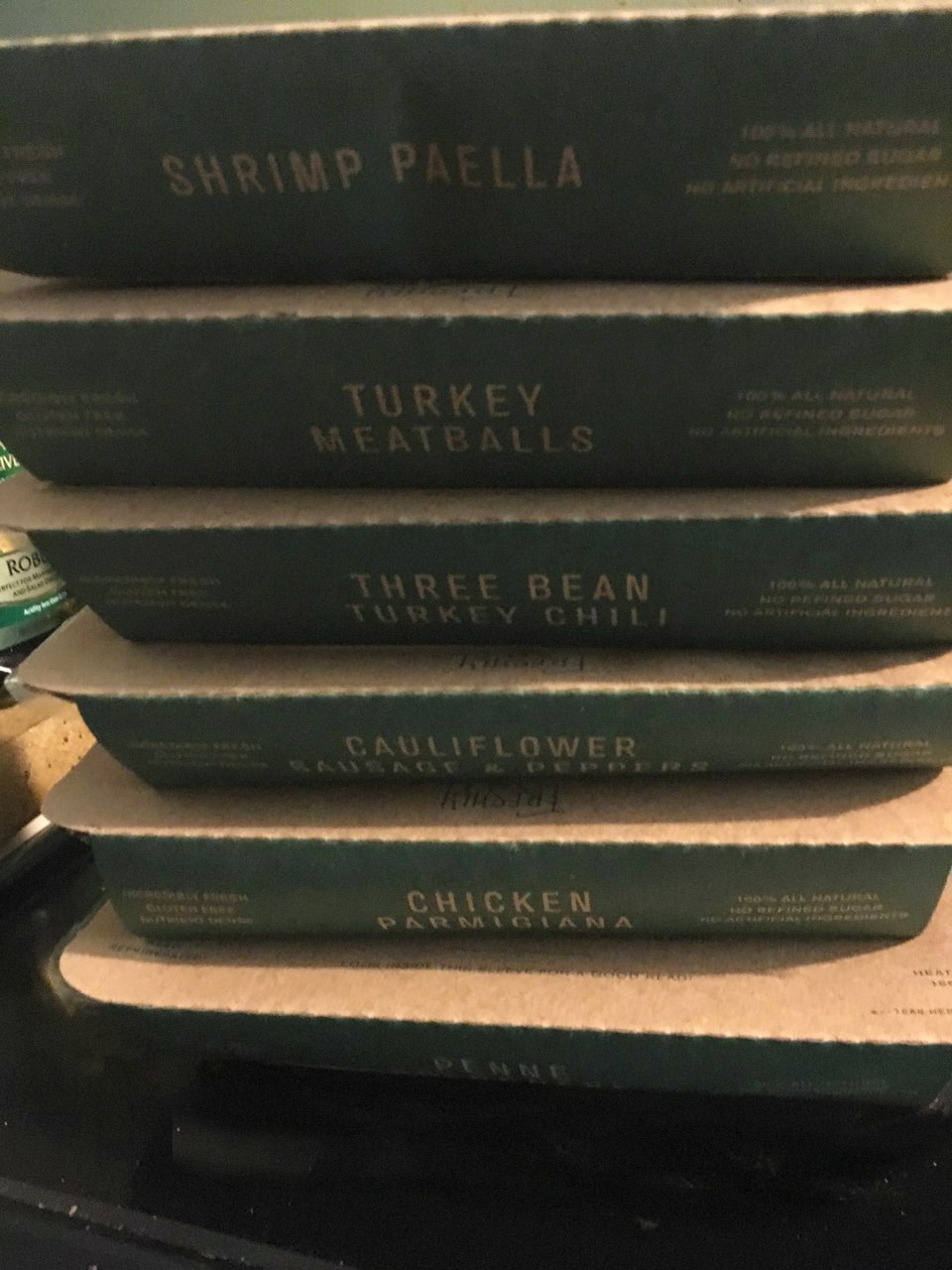 But you didn’t come here to hear me babble on about all that. Let’s chat about the Freshly meals I picked up to try for this post.

On week one, I threw in a few meals that I had before on my previous foray with Freshly. So, some of the meals were surprising, but I had two of them previously: the chicken parm and the chili. Here are my reviews of all the things I ate during week one.

This was the first Freshly meal I tried this time and I actually loved this one. I was pleasantly surprised just how big the shrimp were and how many of them there were. Of course, there was way more andouille sausage in the package (but that was to be expected.) Some of the vegetables were a bit crisp for my liking (but then again, I like things to be so soft they basically melt away.) Overall, there was lots of spice and flavor. It was a great dish to start off this two-week trial of Freshly! 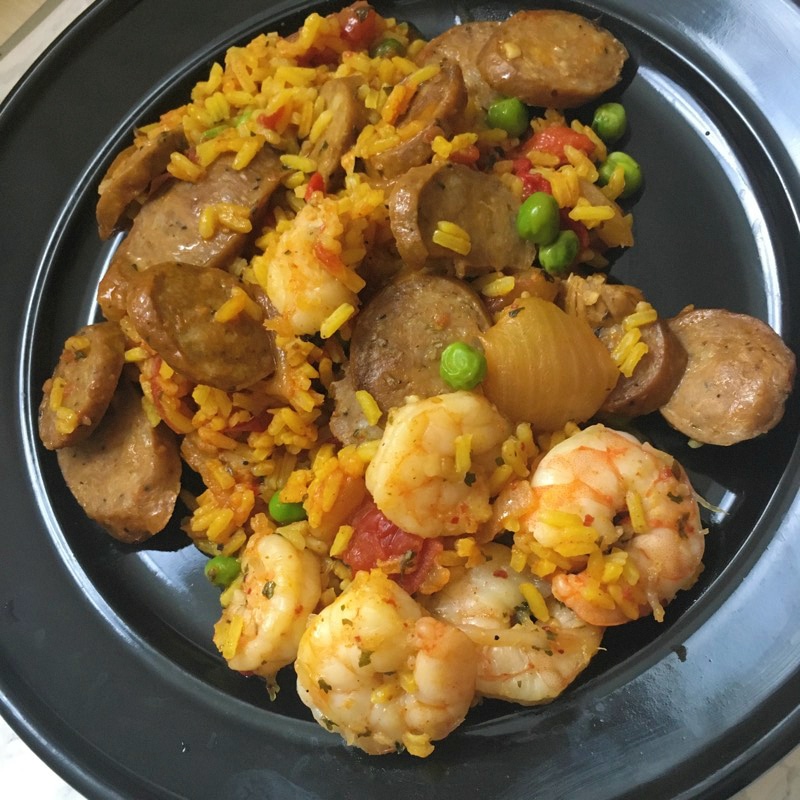 This is one of the meals I had tried before in the past and liked well enough. The broccoli in this dish was rather bland. It was just broccoli. I don’t think they advertise it as having seasoning on it, but it would have been nice if they’d put more thought to it than just slapping some broccoli in the dish to make it more filling. 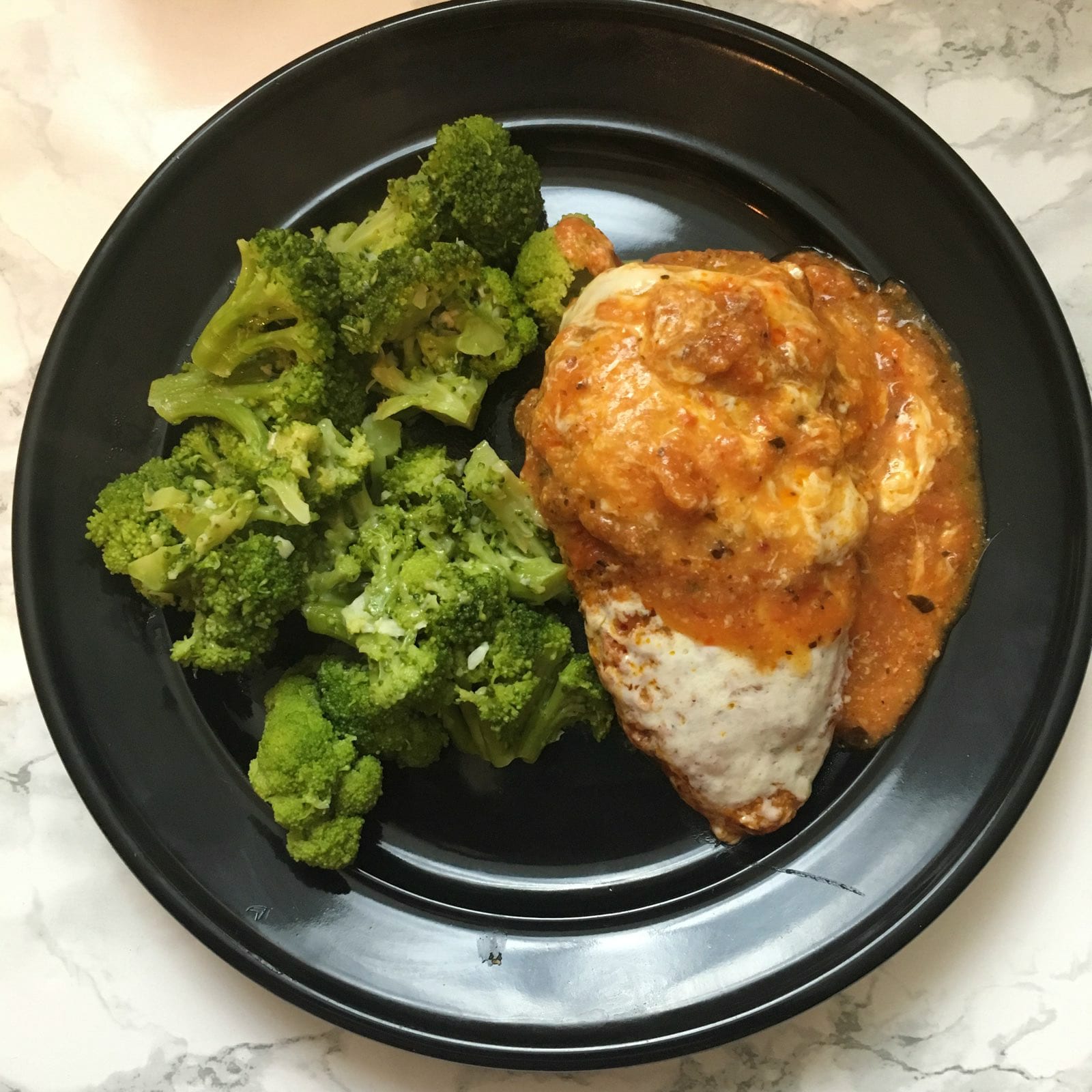 I liked this dish well enough. There was plenty of meat and the penne was well cooked. It was a very filling dish as well which was nice. It was one of the biggest dishes calorie-wise that I had tried in this batch. The penne bolognese definitely wasn’t my favorite dish, but it was good nonetheless. 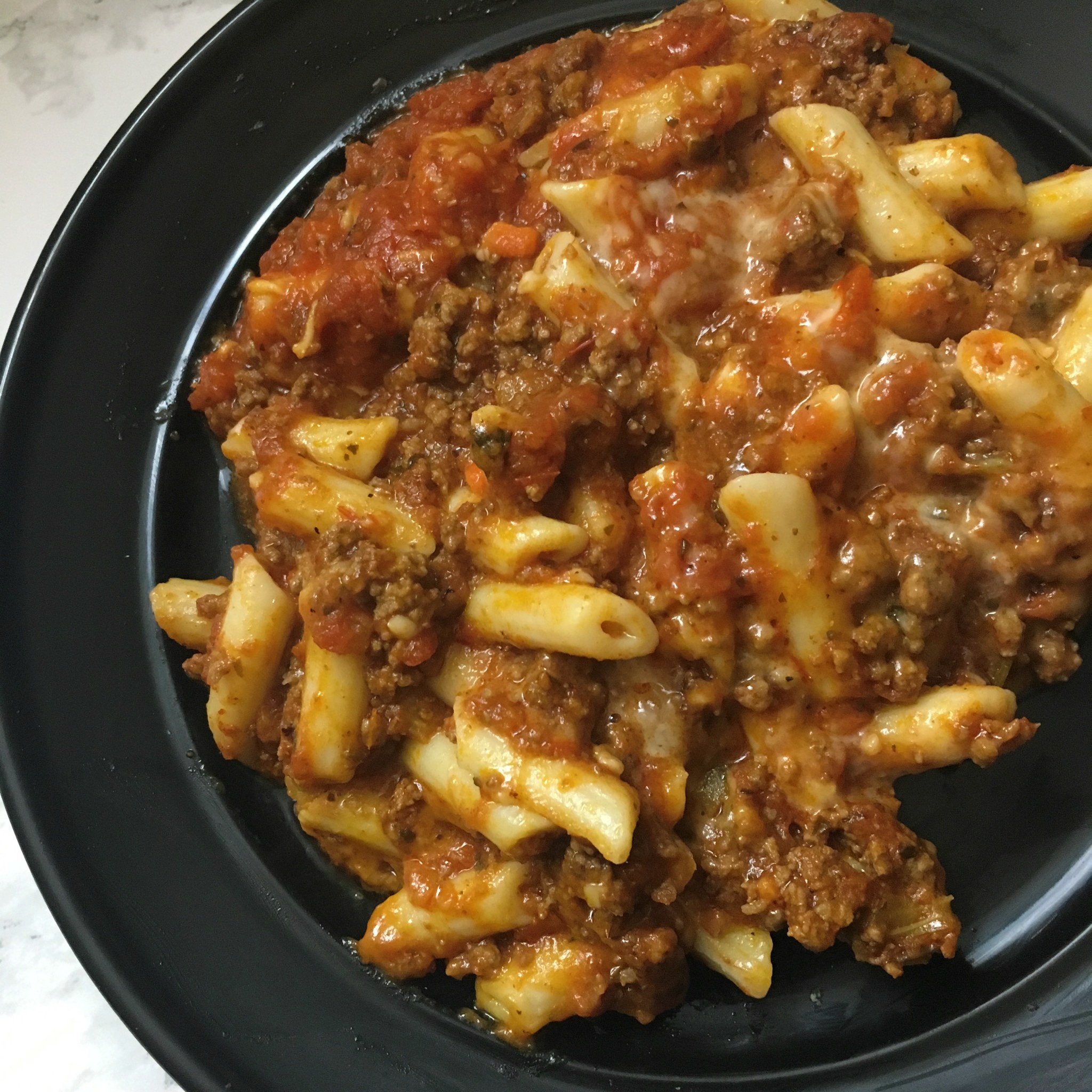 I wouldn't give this dish a perfect score, but it was pretty close. I loved the turkey meatballs! They were delish and they were nice-sized meatballs too. I am a little iffy on the veggie noodles though because they were definitely not a replacement for regular pasta noodles (I can never take veggie noodles as a replacement though, no matter how much people say they can be.) 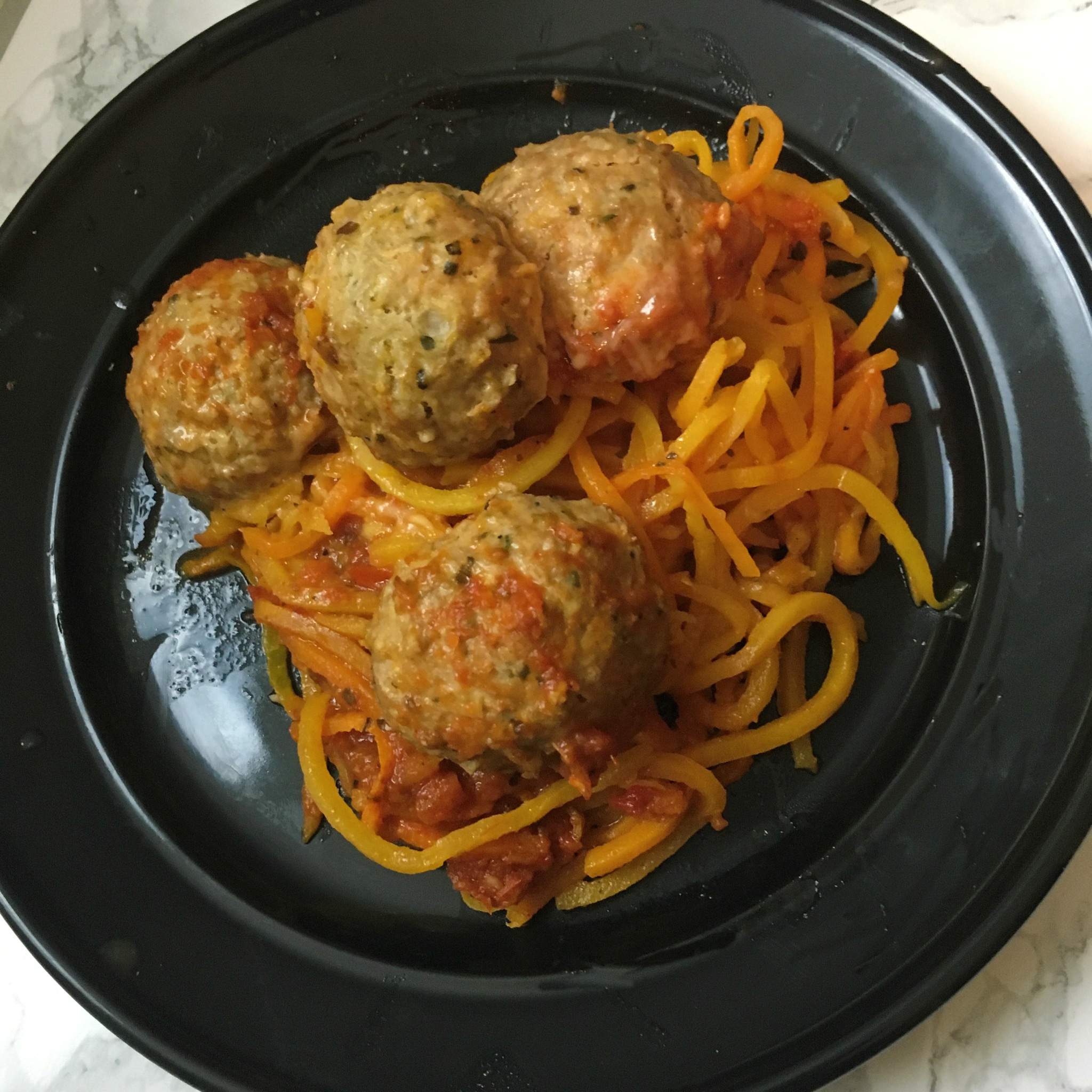 This was my favorite dish of these six week one meals. I had tried this meal before and I loved it even more this time than I did the first time. If you ever try Freshly, this dish is a must get in my opinion. It's filling and extra yummy. It would have been even more perfect on a cold day. 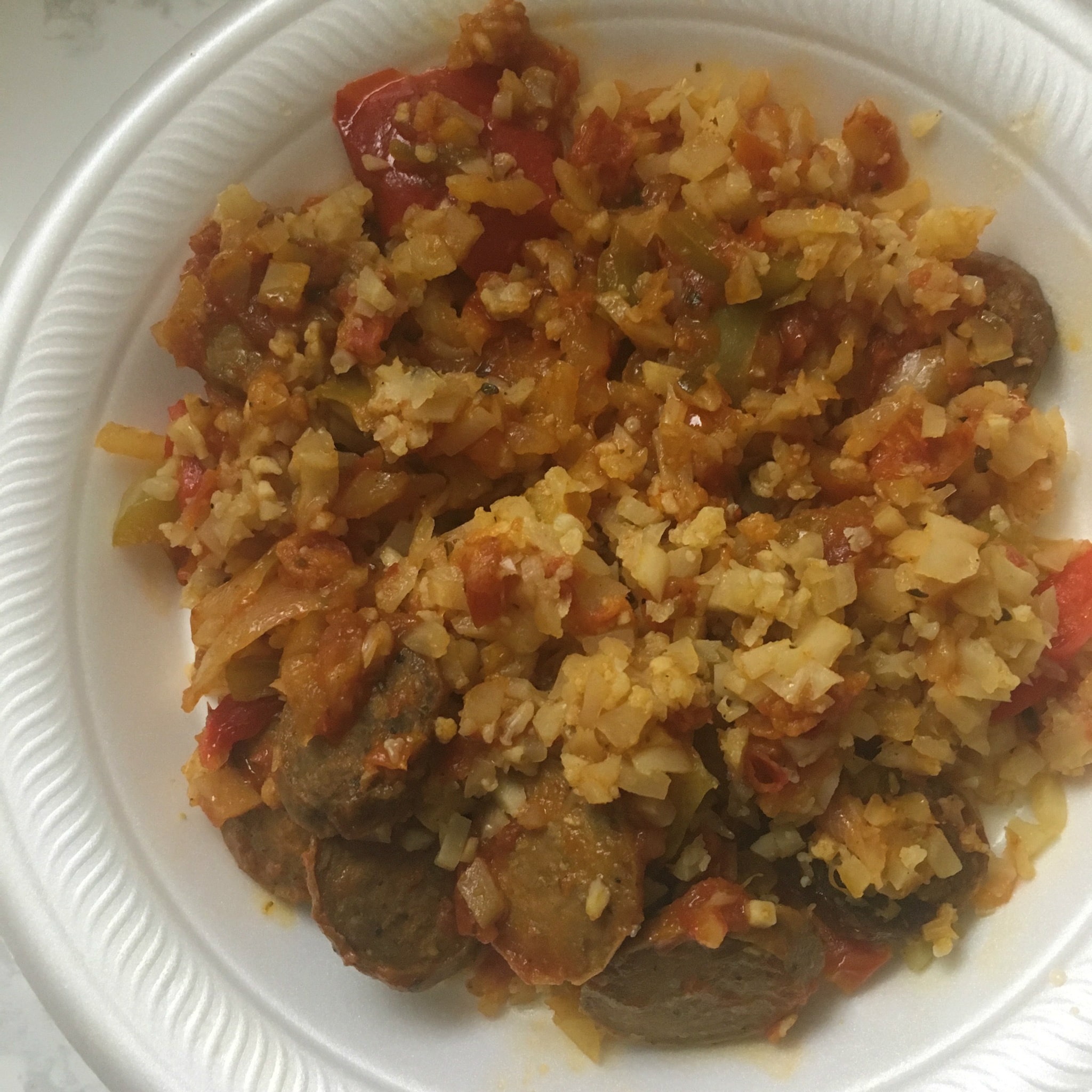 Week 2 was a bit different for me because I hadn't eaten any of these dishes before. I tested the waters with a few dishes I had in the past on week one so I know that at least some of the dishes would be tasty.

This meal was legitimately impressive. I ate this meal first, thinking it would be a throwaway meal, and it was not at all.

The carrots were a bit tougher than I would like because I warmed it up, filmed it, and decided to throw it back in the microwave for another 20 seconds, but they were still yummy, especially when I ate them with the BBQ pulled pork. The pulled pork was also fantastic. I was a little wary that they'd mess it up, but this stuff was great.

But, the showstopper, in my opinion, were the squash cakes. Who says that about squash cakes, right? I do. These were amazing and I am pretty sure also had some pieces of bacon in them. I can't get over this meal y'all!

Lastly, this meal was hella filling. It's only 360 calories so I wasn't expecting to be so full after the meal, but seriously, I was full when I got done eating everything. I could eat this meal at least 3 more times. 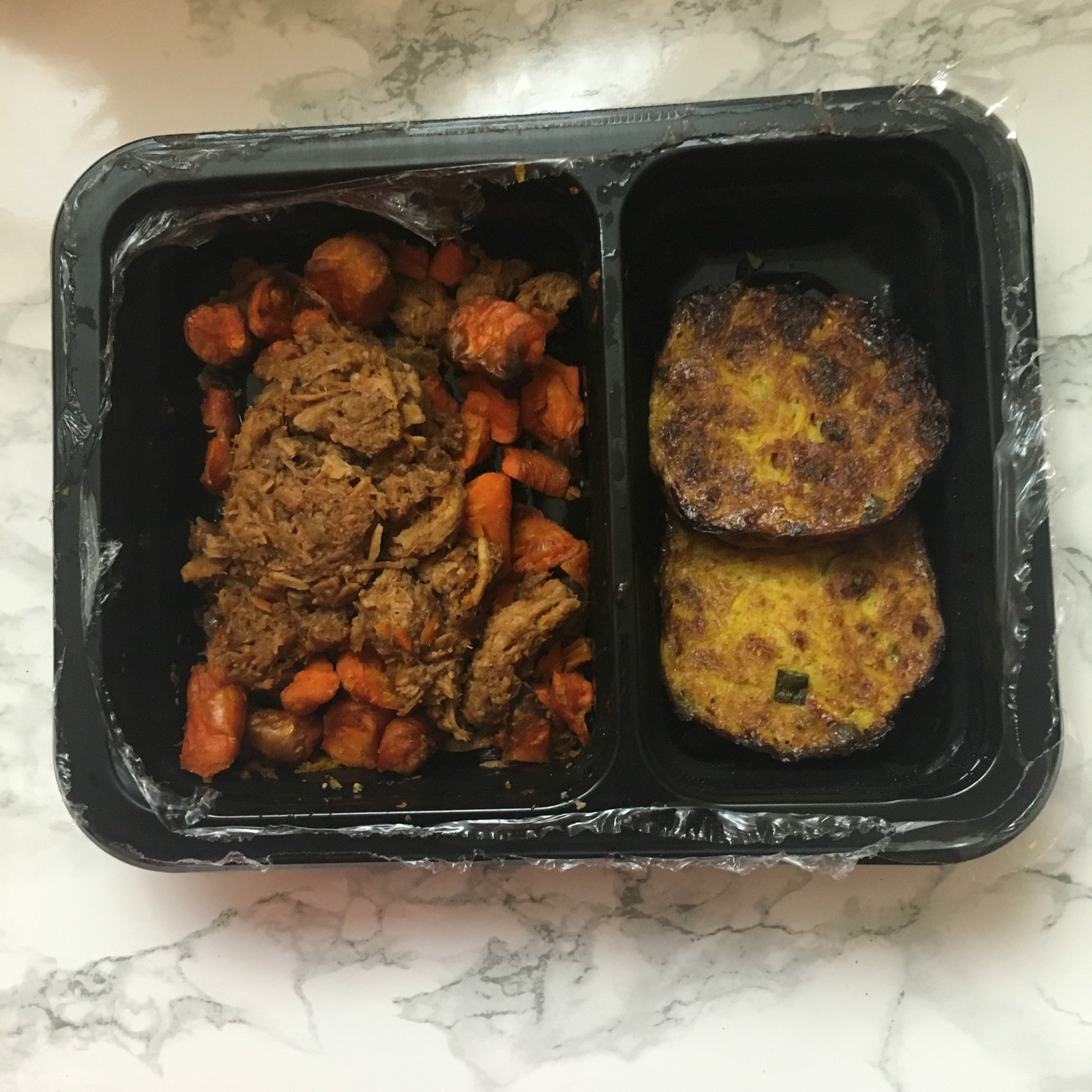 I was actually very surprised by how good this dish was too. The “cakes” were coming in hot during this week of food. I ate this after a very busy day making sure my niece and nephew didn't tornado through the house. I even had a bit of wine with this dinner because I was settling in after a v. stressful day.

Everything about this was yummy and there was so much food in this dish. I was in love with the succotash and the roasted potatoes that came with this dish were perfect. 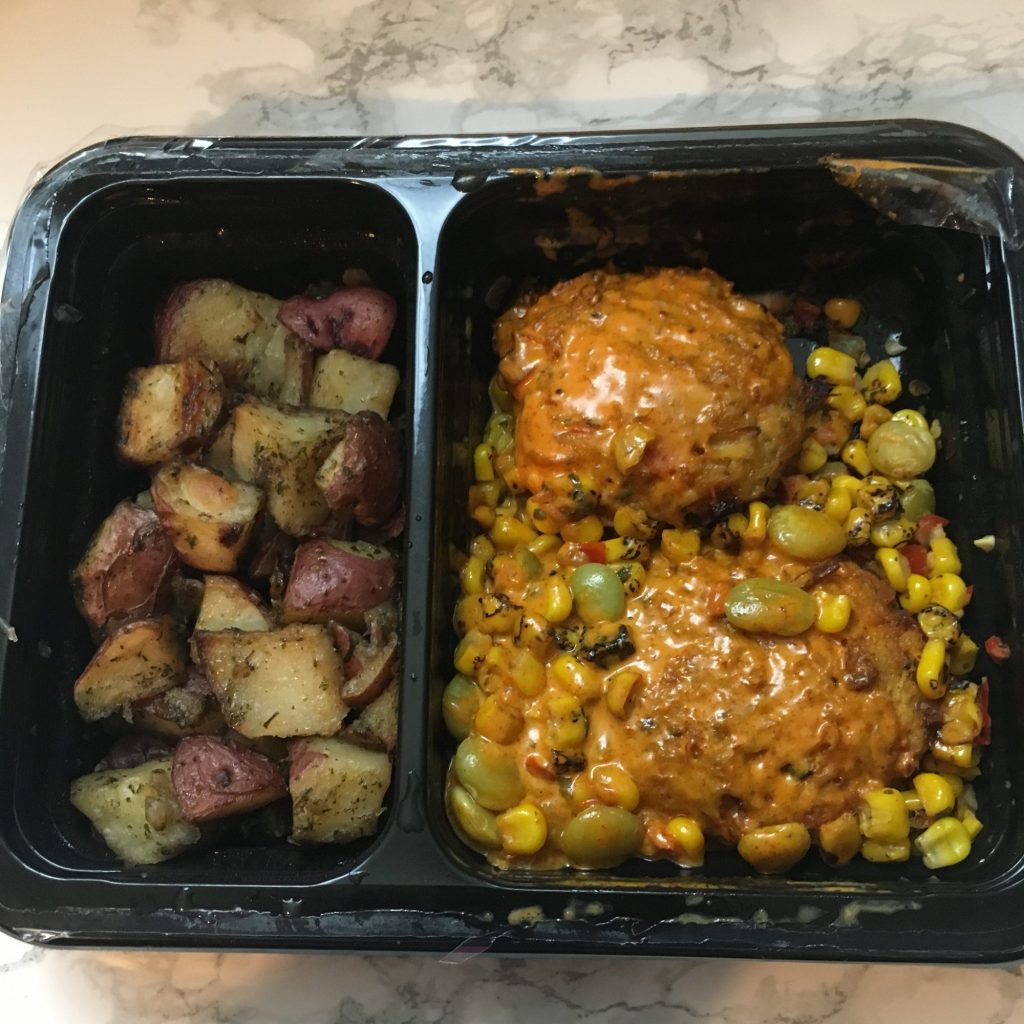 This meal was nothing to write home about, but it was still quite yummy. I don't remember a ton about this dish, but it included potatoes so that's always a plus in my book! 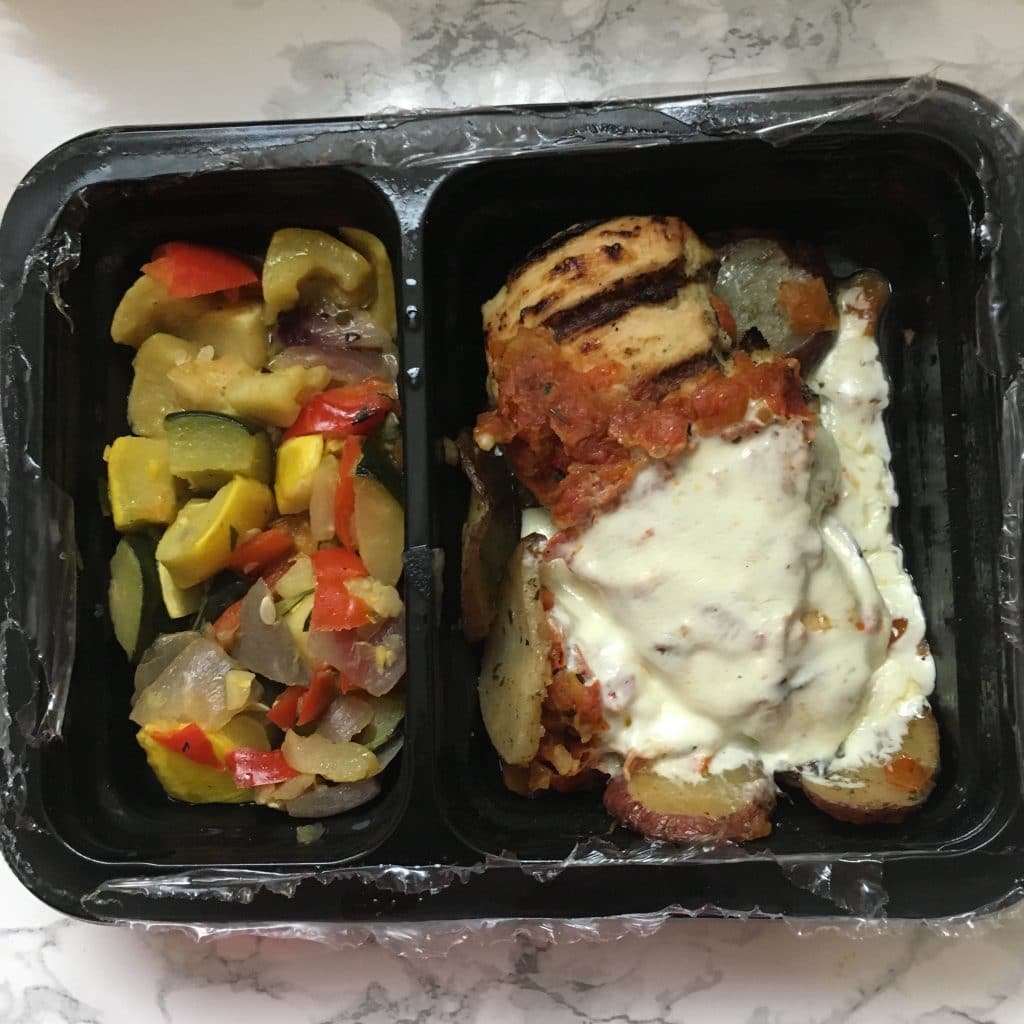 This was another chicken dish that was just good. I didn't really love the Mexican street corn, because it was chewy in a strange way due to how they prepared it. The fajita chicken was good, although it probably would have been better if I had some tortillas at the house to pair it with. 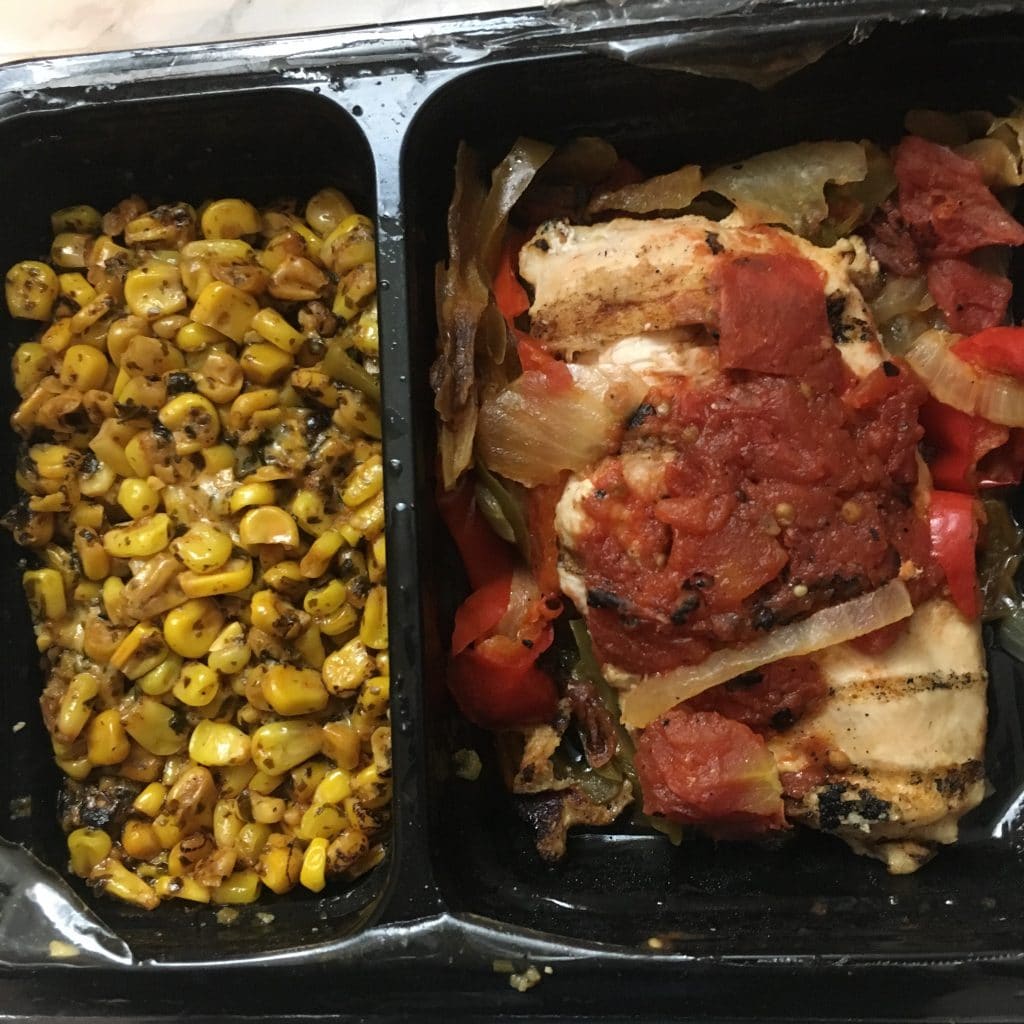 The baked penne marinara was cool. It was interesting because it was one of the only pasta dishes that cooked in a weird bowl inside compartment. Overall, though, it was a good dish with plenty of Italian sausage inside. 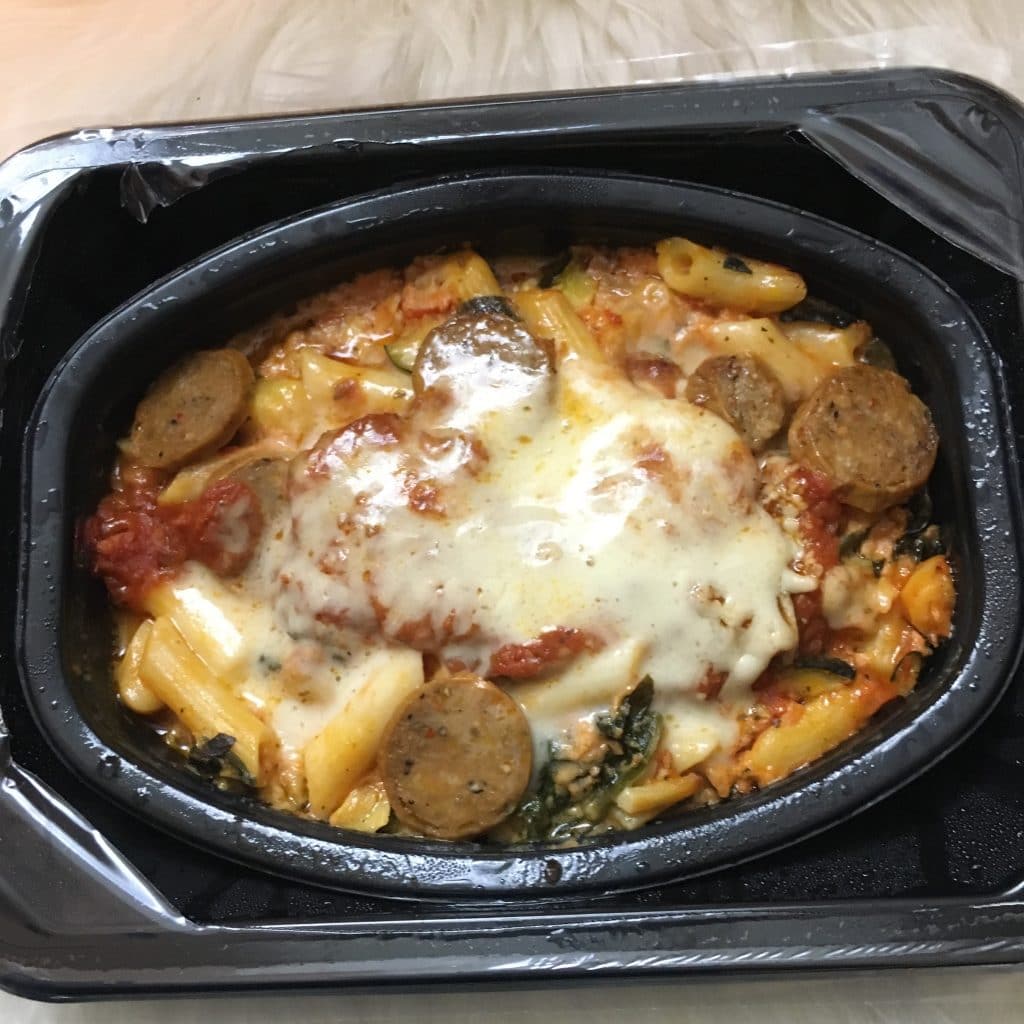 I was a little skeptical of how I would like this dish because I had never had chicken tikka masala before, but I ended up really loving this dish. The vegetables weren't really up my alley but as soon as I combined them with the chicken tikka masala, all was right in the world and they were yummy again. 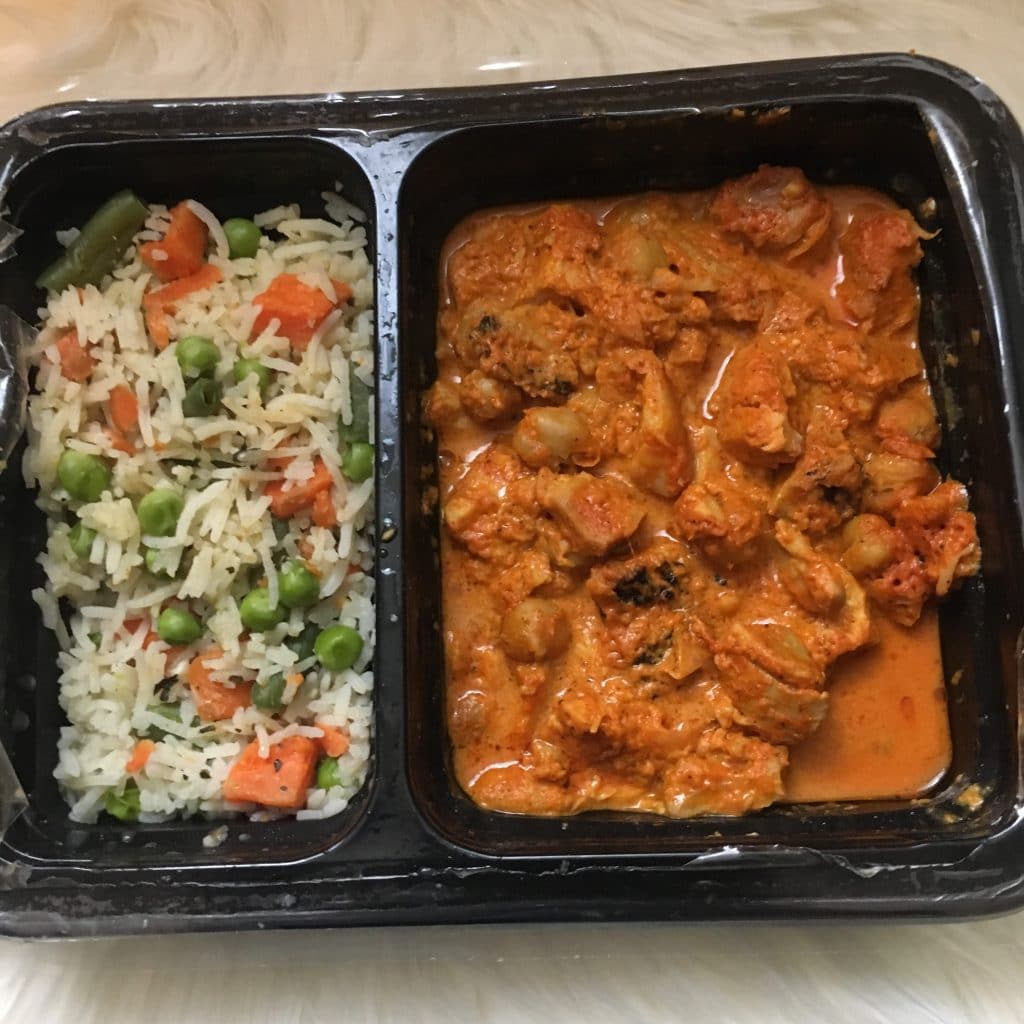 So there you have it, my full review of Freshly! I'm so excited that you stuck with me during this process. I hope that you got something out of this as you decide on whether you want to try Freshly for a few weeks or not. I think that it's worth a couple of week's investigation into the dishes at least.

Want to save $60 across your first four boxes with Freshly? Use my affiliate link to save money.

My top three favorite dishes from this experience were:

I am so glad you took this journey with me, and I hope that you decide to check out Freshly.

Gobble Review: Is This Meal Service What You Need?

Wine Not?: An Honest Review Of Bright Cellars