My All-Time Favorite Artists And Bands

I don't know if you know this about me, but music is my favorite thing in the world. So much of my teenage years were spent listening to music and I have a lot of favorite artists. Today on the blog I wanted to share my favorite artists with you and show you some of my favorite songs from them. These are not in any particular order. It was hard enough for me to dwindle a list down to 15, ranking would have been impossible. 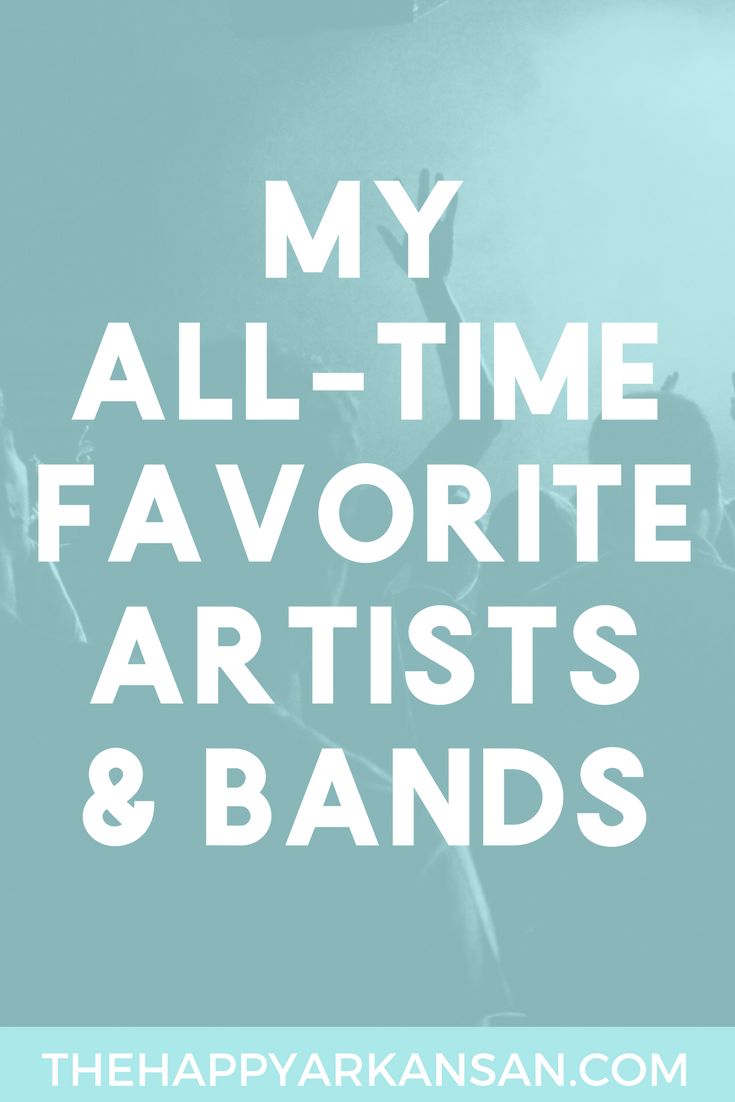 There was absolutely no way I could create a playlist of my all-time favorite artists and not include My Chemical Romance. I started listening to this band when I was 13  years old, I have seen them live twice, and they made SUCH a huge impact on my teenage years. They are broken up now (unfortunately) but they have made a lasting impact on my life and the lives of countless others.

Kings of Leon is another band that has made a huge impact on my life. I love their music and I have way too much of it. Their sound is constantly changing and evolving and has gotten so much better over the years. I started listening to them a bit later in my music journey (around 16-17), but I still love them just the same. Fortunately, they are still producing tons of amazing music and their latest album WALLS came out last year.

Silversun Pickups are everything, y'all. They are definitely one of my favorite favorite bands and you can imagine my happiness when I finally got to see them live in 2016 after trying for so many years. This band consistently produces beautiful music and I cannot wait for their next album, whenever that may be.

Foster The People is actually a band I discovered right before I went to college. As you can tell, most of the bands I've discussed so far, I discovered in high school. A band discovered between my senior year of high school and freshman year of college is quite a development. I am so in love with their music collection and it goes far past Pumped Up Kicks.

I learned about Alabama Shakes while watching an awards show (I believe it was the Grammy's) in graduate school (whaaaaat?!) I saw the band on television and I knew I had to listen to more of their work, so soon thereafter I became engrossed in the band and all their awesome albums.

I am honestly not sure when I first started listening to J. Cole. I can't fully remember. I remember I used to listen to Work Out like all the time in college (very rarely when I was actually working out, but sometimes when I was!) In the past year or so I have really gotten into some of J. Cole's recent stuff and it's all amazing.

Does anyone ever truly remember when they first started listening to Beyonce? It's almost just like she is just a part of your life. I got to see her last year with my sister on the Formation World Tour and it was literally the best night of our young lives. She is such a great performer and great in concert. Secretly ready for her to be on the road again!

When I was a teenager I listened to a ton of 90s alt rock because I had DirecTV and they had a ton of music channels devoted to rock music. One of the bands that stuck the most when I was listening to all that music was Nirvana. I actually really loved them, bought all their CDs, etc. They were an awesome band who has made an impact on so many people across the world.

Kesha has such an amazing talent. She creates all kinds of music from ballads to dance tunes and everything in between. I love that Kesha continues to morph, change, and refuse to get put in a box. I am a fan of so much of her music because of that.

Dr. Dog is another band I found out about in graduate school. Someone introduced me to this band and I quickly fell in love. I honestly have no idea how I had never heard of this band until last year. They have a HUGE archive of songs, so it was seriously hard to pick my favorites, but I think you will love the ones I picked.

Panic At The Disco

I have been swooning over Panic At the Disco since I was like 13-years-old. They are one of the oldest rock bands in my collection of favorites. Most of my favorites come from the first two albums, but they still create amazing songs to this day.

This is another band I have been listening to forever. I have definitely been listening to them since around 13 or 14 years old. I don't listen as much anymore, but they made such a huge impact on my life that I couldn't leave them off this list. They have seriously impacted my life for the better and I would feel awkward leaving them off my all-time faves list.

Linkin Park's singer Chester Bennington passed away a couple of months ago, unfortunately, but I had to add this band to my list. Linkin Park is another band I listened to as a teenager more than I do now, but they have seriously been such a blessing in my life. I was definitely a more depressed teenager so listening to this music really helped me get out my feelings and get past all my teenage issues.

Rihanna is another artist that I can't quite place in my musical timeline unlike some of the other artists on my list (besides Beyonce) where I can point to a particular time frame at least. I have loved so many of her songs over the years, and she is just a fun artist to listen to.

Tom Odell is my Apple Music music bby. I first heard him when I had the Apple Music free trial and he was on a playlist I used to listen to a lot when I went to bed. I quickly realized that I loved his music a lot, and ever since he has become one of my favorite artists.

Playlist Of All Songs Mentioned

Here is a playlist of all the songs mentioned. With all of the songs, this playlist is almost three hours long.

So, there you have it! These artists are some of my all-time faves and I hope that you love them too! One day I plan to write a follow-up piece to this. I love a lot of artists, but I wouldn't consider them my all-time favorites. With that being said I would love to share them with you even if they aren't my all-time favorites. Maybe I will create some in-depth song-by-song playlists for various occasions or something of that nature in the future so you can get to know my other music tastes.

MEMPHO Music Festival 2018 Through My Eyes